There are several scientific, technological ways roads are engineered to minimize accidents and maximize safe driving behaviors. The goal is always to achieve Vision Zero – eliminating roadway fatalities. This is Part 2 of the 3-part series on Technology and Your Drive. 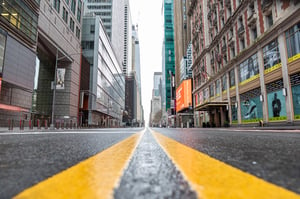 Originally, pavement markings used to delineate lanes were paint, but many roads now utilize tape. The tape is much more reflective, making it easier for drivers to see. Black tape is often added alongside white tape now on concrete roadways to provide more contrast and make markings more conspicuous. Additionally, the tape only needs to be replaced about every six years, whereas painted lines typically need to be redone almost every year.

Designated speed limits are of course meant to be followed, but traffic officers are not always around to enforce it. Higher speeds can lead to more severe, and potentially deadly, crashes. To mitigate this, many roads now utilize Dynamic Speed Feedback signs. "These signs have a built-in radar unit to measure, display, and sometimes record the speed of oncoming vehicles," Devin Joslin, Navjoy Traffic Operations Division Manager, explained.

Cameras, when paired with a carrier ethernet technology or a fiber network discussed in part 1 [LINK], can be essential in speeding up incident response. With older cameras, TMC operators can get an incident report and then tune into that area or intersection to provide first responders more details or monitor other areas of concern near the incident. These insights ensure the incident is handled more effectively. Additionally, more advanced cameras available today have the ability to automatically detect incidents, such as topped vehicles or wrong-way drivers, and send real-time alerts, which greatly improves response times. 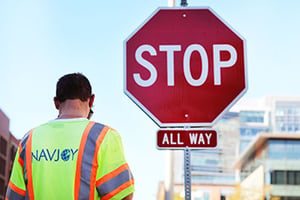 Another easily overlooked aspect of technology is the details that go into traffic signs. There's a lot most people don't know about the intricacies and science of traffic signs. For example, "sign sheeting and fabrication techniques have advanced tremendously over the years," Joslin said. "The reflective sheeting CDOT uses now is expected to last more than 10 years. CDOT also treats signs with a protective UV coating and an anti-graffiti layer so the signs are more resistant to fading, and paint and debris are much easier to clean off." These key details ensure drivers are prepared for road conditions and expectations as best as possible at all times.

The detailed science that goes into paving a road is extensive. Most roads in the United States are made of asphalt concrete. Yet, each road could have a different paving mixture and thickness depending on factors such as traffic volumes and percentage of heavy trucks, underlying ground support and available drainage. Pavement design is an important part of roadway maintenance. When the road is damaged, it can cause congestion, crashes, and car damage. Additionally, if pavement is not regularly maintained, the entire road might have to be reconstructed at a significant cost.

There is so much technology, science and detail that goes into each of these roadway components. Without any one of these, your drive may end up a lot less pleasant.